Today we’re bringing you an interview with Bari Baykal, a DP and photographer based out of Turkey and England. Bari is Sony’s independent certified expert, Phase One’s ambassador and actually our very own affiliate. I interviewed Bari about shooting his latest documentary and what’s it like to shoot in extreme conditions.

Bari was kind enough to share with us some behind the scenes insights from his work and the process behind creating the documentary for which he’s using our LUTs in the color grading process.

So tell me a little about yourself.

“I was born and raised in Mannheim/Germany and I started capturing photos when I was 9 years old. It all began with holiday memories when my mother bought me my first 35mm Yashica film camera. When I was 11, I had the chance to film some skateboarders with a Sony Handycam, a camera my father actually bought for himself but never had the chance to use it.

I’m a commercial photographer and a DP working for many international brands on documentaries and advertising spots. In the past I used to work as a still photographer for Castel Film studios in Romania/Bucharest where it was a nice time to work on Hollywood sets.

I’m an educator as well and since 2015 Sony and I try to teach cinematography and photography students as much as we can in my seminars about new technologies and the art of filmmaking.”

For how long have you been a filmmaker?

“Well I wouldn’t describe myself as a filmmaker, sometimes I even hate the word filmmaker. There can be only one filmmaker on set and that is the director. I am the guy who looks behind the lens, the translator of the director, but I am not a filmmaker. Anyway, I’m a DP since 2001.”

What made you pick up the camera in first place?

“I guess I want to hold on to the emotions I experience forever. My eyes are capturing the images and my brain is processing it way before I send it to the lab or grade at it on the computer. If I don’t have a proper camera with me, I capture the images using my phone. Whenever I see something beautiful I just have to capture it.“

What would you say are the most important things you have learned about cinematography?

“To read, to listen, to see, to taste and to communicate.”

But most important it is not how you use the light, but where you put the shadow.

What would you say is the most important thing you have learned about color grading?

“That’s a very hard question, but I’m glad you asked it. I usually try not to mix too much colors in a scene. That’s why when I am filming a scene, I am very close to the art director and production designer as we go into great detail about colors and textures. Colors effect our emotions so it’s important to keep a coherent color palette. For me color grading begins in the camera.”

Let’s talk a bit about work. What do you mainly shoot today?

“Documentaries, mostly on nature and animals living in the forest, but my next project will be about extreme sports which I am going to direct as well.“

Why this? What is it you like about it?

“Well, I used to shoot a lot of music videos and advertising spots which I am still doing from time to time. But it isn’t real. The director controls the acting, the emotions, it’s a commercial. I was very happy to discover the beauty of the forest and the animals. It made me happy. Shooting in nature, you are just free to film what you see. Experience it. Sometimes you get nothing, sometimes you capture some great footage.”

Documentary was shot in some pretty intense conditions. Tell me about it.

“Filming in the cold snowy weather can be very difficult especially for the batteries, sine they’ll empty faster when the weather conditions are under 0 degrees Celsius. What I did is stitch a small pillow filled with sheep wool to keep the batteries warmer. You’ll still need to have plenty of batteries with you, but it does make a difference.

When we were filming in the mountains we had snow everywhere, and filming in S-LOG, I say S-LOG because we filmed the documentary with the SONY PXW-FS7, SONY PXW-FS5, and some A7S2, can be somewhat confusing. You have to take a good care of your exposure. On one hand you don’t want to loose details, on the other, you want to have as little noise as possible so you’re going to overexpose. I overexposed 1 or 1.5 stops higher.

When you have snow around you already have 2 stops of overexposure in your viewfinder, so I recommend to use the histogram feature and IRE to read your numbers, otherwise you risk overexposing objects in a way you can’t correct later on in post.

My recommendation is to use ND filters for finer control. We were lucky to shoot Sony, because Sony broadcast cameras have variable ND filters in camera, which is very important.

You see, shooting out in nature, you do not always have clean hands and conditions are not optimal to say the least, so filters you put in front of the lens easily get scratched, dusty or dirty.

You’ll have to use a polarizer on the lens though, as in snowy weather conditions, you have to have a way of controlling shine and reflections.

White Balance is another issue. Setting correct white balance is extremely important because weather conditions can change any minute. Try to set your white balance in every scene if possible. If we have to be quick in some scenes or there’s an animal we have to react to, I share the Kelvin temperature with my camera crew so that they use the same setting as I do. Later on, as we’re on the same page, it’s easier to correct the footage if needed. Using a color checker from X-Rite or DATA Color Spyder Checker can save you a lot of time in post. 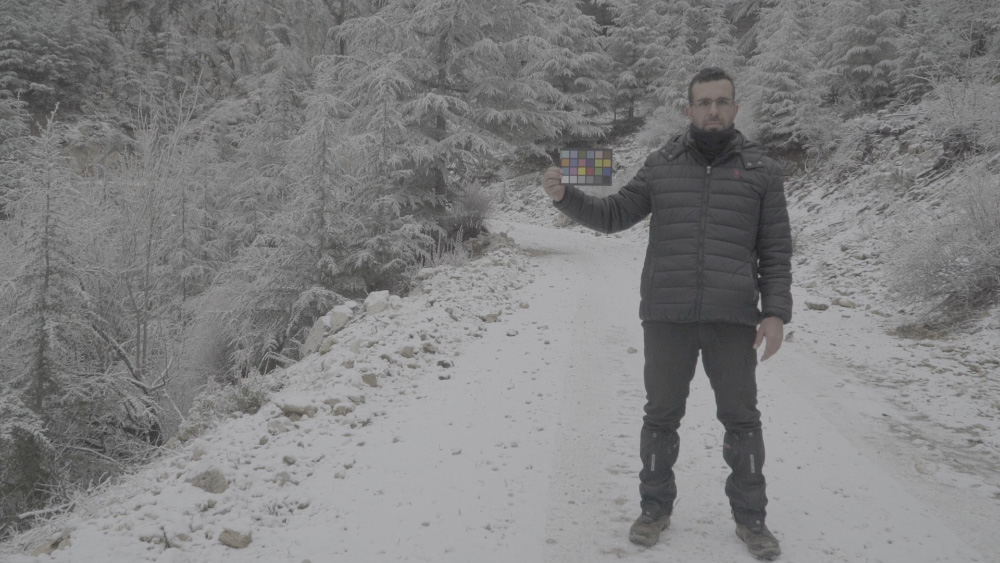 My last recommendation for videographers who want to film in the nature is, always take a soft pillow with you.

You need a soft pillow whenever you’re not using a tripod or you have to shoot from low angles. Also, stones, mud and other things can damage your camera. Pillow reduces the risk of a damage to your gear. Finally, pillow can help you get a  good balance during for the shot.“

Let’s talk a bit about the color. What did you do color-wise?

“I want my colors to be driven by emotions. What does that mean? When I’m filming the first thing I check is the weather. Light is everything and shadows define the edges. They are what brings everything into the right shape. I try to communicate these emotions to the viewer. 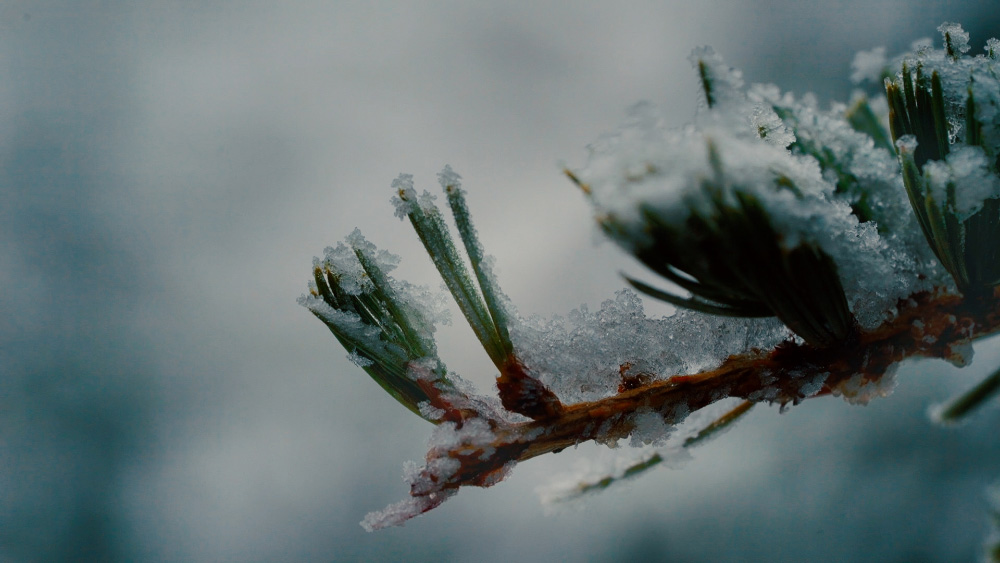 The branch that you see was filmed between 4-5 pm and it was snowing, so cold weather and the time of the shoot tell me “this should be blue”. Specifically, soft blue light with plenty of contrast. That’s what I try to achieve in the grade.

The spider web footage is set in the hole of a tree. I was lucky to have a deep shadow behind the subject to bring out the web and see more details. To show deep macro shot you have to use deep colors. Eventually I decided on going for a warm, brown-ish look. While this may sound counterintuitive to the frozen drops on the web it helps me keep viewers eye longer on the shot. You see, the center of a human eye is always in the middle but your perspective isn’t in my control. So I gave the footage a warmer and calmer look to keep viewers eyes longer on the shot. 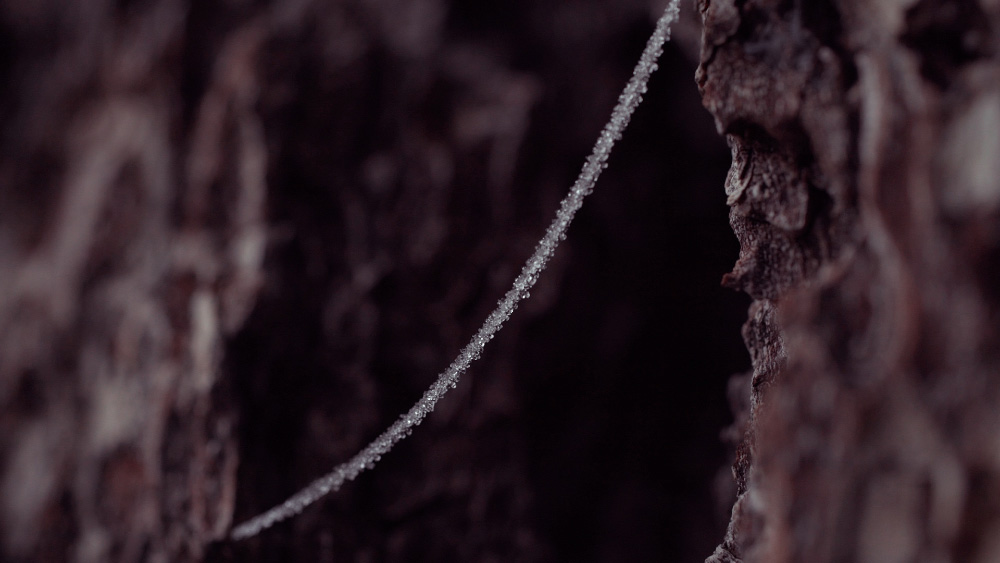 Tell me a bit about the workflow of the color grade.

“These two shots were actually shot in Rec.709 so no log conversion was needed. For the web shot I used the Talc LUT, reduced contrast and slightly raised the shadows in the middle of the shot. 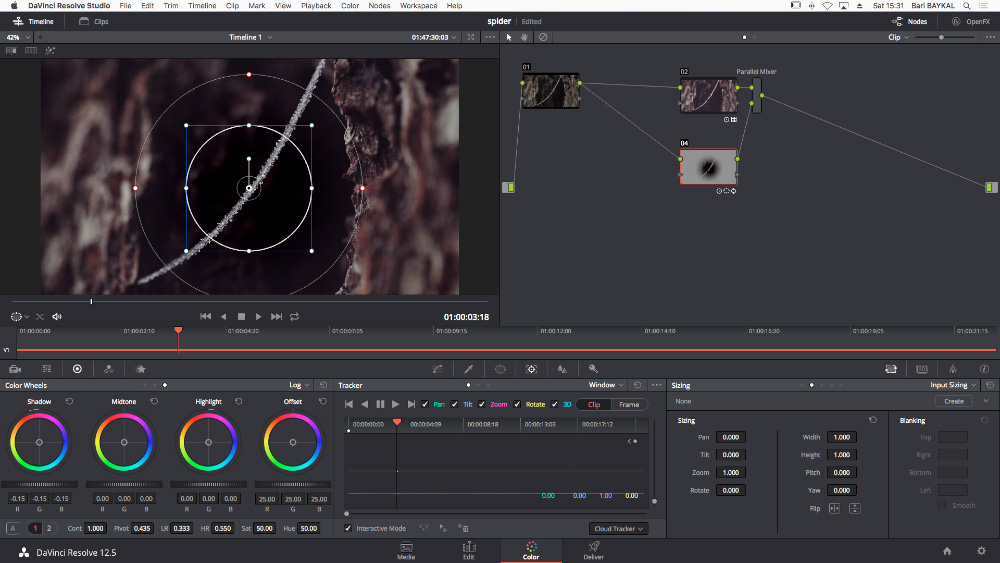 For the branch shot I used the Onyx LUT and tracked the motion of the branch, so I could keep the highlights in control and focus the viewers sight on the branch.” 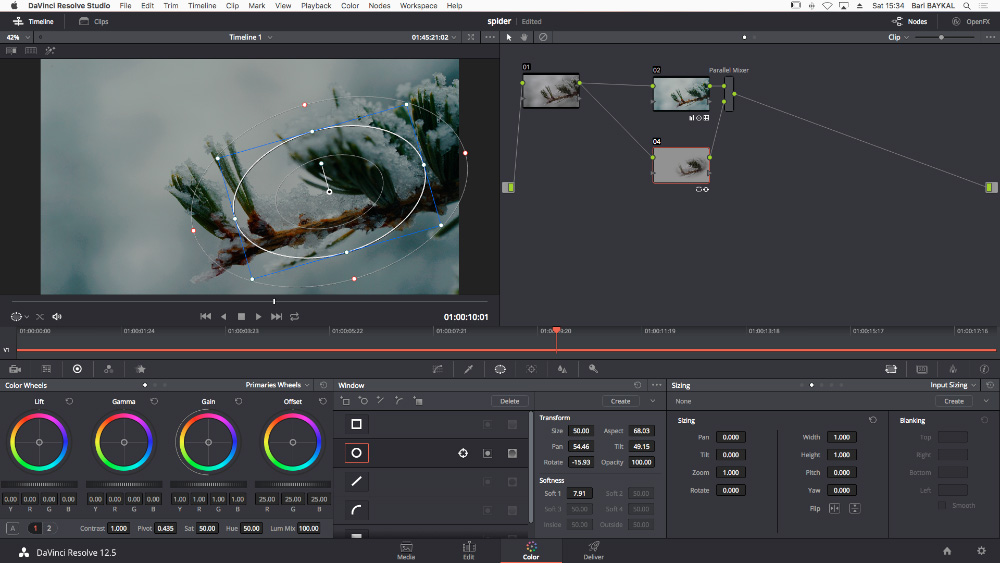 Would you say that without the LUTs your turnover would be slower?

“Definitely yes! Creating your own look takes time and patience.

When you need a fast turnover, LUTs are a must.

I think every colorist, DP and editor should use LUTs, since they simplify the workflow so much.”

Is there any particular style of color grading you find yourself attracted to? Why this?

“I like strong shadows. I never use too bright or saturated colors. I try to keep the highlights rather bright.”

May I ask what is it that you most like about our LUTs? Which are your favorite?

“I love the colors, they pop out. They add a dimension to the shots. Vintage colors are my favorites.”

Could you share with us your thought on the Sony’s image? Any advice for shooters using our LUTs with the range of Sony cameras?

“I am a huge fan of Sony cameras. I think that Sony have the best Super 35 mm sensors on the market.”

My advice for videographers using LUTs would be to shoot in 10-bit at least. It makes a huge difference when you color grade your footage.

What is your advice to the less experienced photographers out there?

“Read, write, travel, taste, listen and watch movies. Doing something wrong is way better than doing nothing. Experience comes with practice, not age.”

Thank you Bari for taking the time to do this interview. It was a pleasure! Keep doing the excellent work that you’re doing.